Exactly 60 years ago today, on May 5, 1961, Alan Shepard became the first American to fly into space. But the national hero of the USA is not only the patron saint of Blue Origin's suborbital rocket New Shepard, but the anniversary of his flight is also the starting point for a special auction.

After 15 successful test flights, Blue Origin now wants to take people across the Kármán Line - and thus into space - for the first time on July 20, 2021. Blue Origin is auctioning off a seat in the space capsule as part of an online auction. The profits will be donated to the Blue Origin Foundation Club for Future, established in 2019 to inspire young people to pursue careers in STEM fields.

Until May 19, 2021, bids can be submitted online on a specially created Website of Blue Origin for an opportunity to fly. On May 19, 2021, the closed bidding process will become an open one, followed by a live auction on June 12. 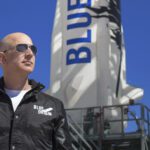